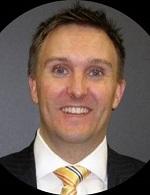 Cameron is the Head of Research for E&P, having initially joined Evans and Partners in 2018 as Senior Research Analyst before becoming Head of Research. In addition to overseeing the research team, Cameron also utilises his extensive experience within the transport and infrastructure sectors to make investment recommendations on securities within those sectors.

Prior to joining E&P, Cameron’s most recent role was at Hastings Funds Management as Director and Deputy Portfolio Manager for The Utilities Trust of Australia, a multi-billion-dollar unlisted infrastructure fund of global assets. As part of this role he also served as a non-executive director on the board of Perth Airport.

He also spent more than ten years at Deutsche Bank where he was Director and Head of Transport and Infrastructure Research. In his earlier career he also held other roles within Westpac Institutional Bank, Shell and BHP.

Cameron holds a Master of Applied Finance from the University of Melbourne and a Bachelor of Business in Accounting from RMIT University. He is also a CPA and a Graduate of the Australian Institute of Company Directors.